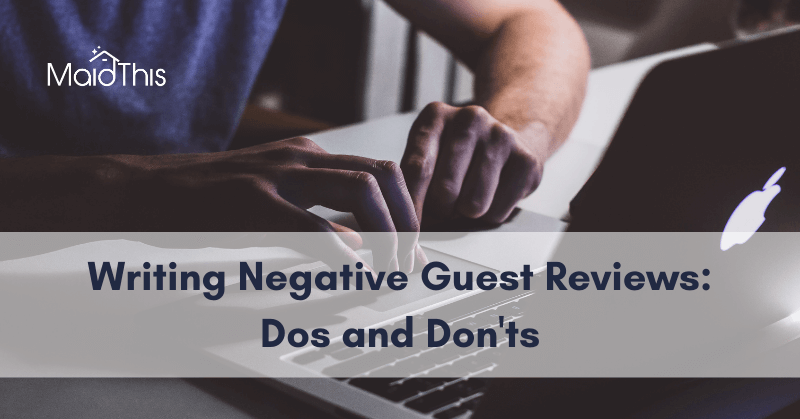 As a host, you hope every guest treats your property with respect. However, even if you vet each guest properly, it’s possible that you’ll eventually end up with a bad hosting experience at some point in your business.

In this case, you should feel free to write a negative guest review to spare other hosts from suffering the same fate. That said, negative guest reviews must be handled with care in order to help your case. Before you write that review, here are some dos and don’ts to consider.

Do: Think it over.

A negative guest review should be a last resort when all other methods of resolution have failed. Before you write one, ask yourself: is it really necessary? Wait a few days so you’re not responding out of fresh-set anger.

Sometimes you might have a guest that rubs you the wrong way, but they still treat your property well and their stay goes off without a hitch. Sometimes a problem stems from communication issues that are out of the guest’s control.

However, there are some incidents that absolutely warrant a negative review, including:

If these have occurred at your property, you’re not only allowed to write a negative guest review, but you arguably have a responsibility to other hosts to do so.

If you’re thinking about leaving a negative guest review, you might be worried that the guest will retaliate by writing a bad review of their own. The Airbnb review process is double-blinded, which means neither party can see the other’s review until both reviews have been written, which reduces the chance of retaliation.

However, it’s still important to remain professional and courteous in your tone when writing your negative review. The point of leaving a guest review isn’t to publicly shame the guest; it’s to make sure the guest acts better in the future and to make other hosts aware of a potential issue. There’s no need to be aggressive or impolite when delivering this message.

Once you get started writing a negative guest review, you might be tempted to include every little thing your guests did wrong in order to really drive your points home. Getting personal or oversharing can actually damage your credibility as a host and isn’t necessary to get your point across.

Your review should be concise and to the point. Be specific when explaining what the issues were, but don’t give more detail than is needed. Include the points that are egregious, but avoid dwelling on smaller issues that wouldn’t normally be a problem if everything else had gone well. These can take away from the integrity of your overall argument.

Don’t: Try to sugarcoat it.

Many hosts feel awkward when writing a negative review. No one wants to come across as rude, so it’s tempting to downplay the issues at hand to avoid hurting your guest’s feelings. However, sugarcoating your review doesn’t do anyone any favors.

The guest won’t understand that their behavior was out of line, and might not understand why you’re leaving them a negative review at all. In addition, future hosts won’t realize the severity of the guest’s behavior and may accept their bookings without a second thought. It’s important to be honest in your review so that everyone involved is clear on the situation.

Leaving a negative review can feel uncomfortable, but it’s an important aspect of running a vacation rental business. As long as you’re professional in your delivery and have legitimate complaints, you’ll be using the review function as intended and doing everyone involved a favor.

At first I tried to take care of all of the cleaning process myself, and it turned out to be a bigger headache than anything else. So a friend told me about MaidThis and its been fantastic. I’ve been working with my cleaners for a few months so far. I recommend you check out the service for yourself.
Brent Airbnb Host in LA
90+

I definitely think that as a company we've been able to make more money, not only because we're saving money by using Maid This, but also because they're helping take a few of the necessary evils with doing vacation rentals off of the property managers plate.
Laura G Airbnb Host in LA
90+

7 Ways to Make the Most of Your Airbnb Investment Property

Making the most out of your Airbnb investment property means doing everything you can to...

5 Reasons Why You Should Be Catering to Families

As a vacation rental host, one of your biggest goals is likely to maintain...

How to Bounce Back from a Bad Vacation Rental Hosting Experience

A vacation rental can be a fantastic source of income. A vast majority of your...